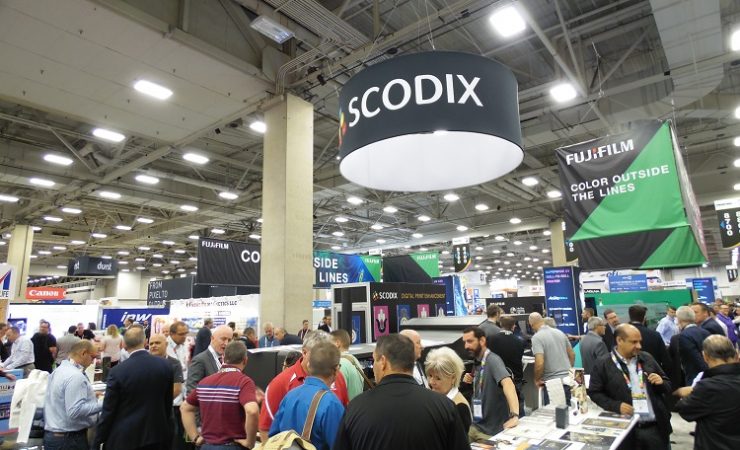 Scodix welcomed visitors to its booth at Printing United 2019

The inaugural Printing United has closed its doors after a three-day debut show that welcomed the world of print to Dallas, Texas last week (23-25 October).

Printing United has been launched as the next generation of the SGIA Expo, opening up the event to more of the packaging, commercial and in-plant printing segments, in addition to the established representation of apparel, graphics/wide format and functional printing applications seen at previous SGIA events.

This was evident on the show floor, where the likes of Agfa, HP, Ricoh, Mimaki and Canon, who were highlighting graphic and wide format printing, were joined by Konica Minolta/MGI, Heidelberg, Xerox and Xeikon with their equipment for commercial and package printing. Fujifilm with the J Press 750S and Arrow Systems and Anytron with any-LINK, a universal speed synchroniser as demonstrated with a Colordyne benchtop digital label printer, were also present, as were Kornit Digital with its director-to-garment printing and Inkcups showing new direct-to-shape technology.

Ford Bowers, SGIA president and CEO, explained that such a diverse exhibitor list reflects market dynamics where, ‘printers are crossing boundaries, PSPs are adopting a greater range of technologies, and there is a need for suppliers and OEMs to have a more efficient pathway to market.

‘By launching Printing United, we have created a platform for companies to take advantage of market forces and give them an outlet.’

David Leskusky, president at Napco Media, a B2B media company that was recently acquired by SGIA, noted, ‘At a micro level, we are seeing printers in all communities diversify and expand into new services; commercial printers into labels and folding cartons, and garment, and those in label and screen looking at wide format and soft signage. At a macro level, industries are converging, with historically separate segments blending together and merging into a unified marketplace. The industry has been clamouring for more collaboration between printing segments.’

Mr Bowers continued, ‘As an industry, print has been punching below its weight and has been very fragmented. Whilst niche constituencies are good and needed, there are things we have to do collectively as a community. Printing United is an expression of that.’